Mindsets are the context for thoughts

I have been journaling consistently for two years now. One of the benefits of this log of thoughts is seeing the trends and patterns in my thinking. In particular I've begun to notice that certain ideas pop up in a correlated fashion. The correlation seems related to the underlying frame and perspective I'm orienting to the world with at that point in time; aka my mindsetmindset

There's nothing too revolutionary with noting I think different things depending on my mood - it'd be weirder if I didn't! But since improving my thinking is something I want to do, I think it's valuable to lay out what a mindset is and how it affects my thoughts.

A mindset is like the space in which thoughts emerge and interact. Certain thoughts are native to certain mindsets, and arise more easily in those mindsets. For instance if I'm operating from an angry mindset, thoughts that are tied to that attribute - yelling at someone, fighting someone - happen more frequently. It's like the activiation energy for those thoughts is lowered. 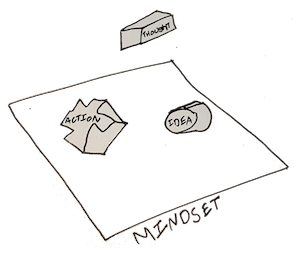 Mindsets are characterized by being multi dimensional. It's not just that when I'm feeling happy, happy thoughts arise. It's that I'm feeling happy, motivated, serene, and inquisitive. This collection of attributes seems to be a "resting" place for the mind – it seems like I'm more likely to end up in one of these regions instead of in a random place drawn from a uniform distribution of attributes. 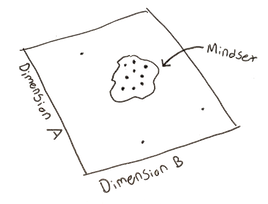 Mindsets are transient, with different ones arising over time and in response to environmental cues. Mindsets are, in the OODA loop terminology, how I orient to the world. Sidenote - though that's just one frame on mindsets, there are many other analogies I could use, depending on the mindset I'm in when I write this

Many productivity rituals - like a writer putting on a specific song before they begin - seem to be aimed at triggering the right mindset for the activity. Similarly many tips for self-control are designed to compensate for the decrease in the necessary activation energy for an action in certain mindsets. Think of the advice to count to ten before saying something when you're angry.

I'm interested in this because I think mindsets are often overlooked by standard productivity advice. As Suchman notes in Plans and Situated Actions human behavior is rarely the result of the "classical rationalist" approach where a person 1.) thinks up a plan 2.) executes the plan. Rather we draw upon the context that we're in, and the rich awareness of the world that provides, to employ plans as one of many mental tools. So getting into the right mental context, the one which fits the task and the goal is key for taking the right actions. I bet for most knowledge work it is in general more effective to get in the appropriate mindset than it is to try and execute the right plan.

Mental moves and Algorithms of ThoughtAlgorithms of Thought
Functions for moving [[mindset]]s. If the mind is in state S then running a set of mental operations that will move it to state S'. The algorithm is often an external prosthesis, as it can be difficult to move from certain [[mindset]]s.
that make it easier to smoothly transition into a new mindset, or let an old one go if it's no longer appropriate to the situation, are valuable. I suspect a lot of the value of meditation comes from making it easier to transition between mindsets.

I posit the way we understand other people is by simulating versions of them on our wetware. It's like how a computer can run many copies...